“The Vatican has refused to open all of its World War II archives. Pope Francis’ visit to Auschwitz on Friday is the perfect moment to change policy.”

The Vatican is most likely reluctant to open the archives out of a desire to protect the image of the Catholic Church, which is understandable but misguided. The appearance of secrecy does nothing to help their image. At least if they give historians access to the WWII documents we can learn the truth and potentially undermine some of the most outrageous conspiracy theories.

Source: How the Vatican Can Shed Light on the Holocaust – The New York Times

“A memorial wall and a new Holocaust museum reflect a push in the Netherlands to give a more complete understanding of what happened under Nazi occupation.” 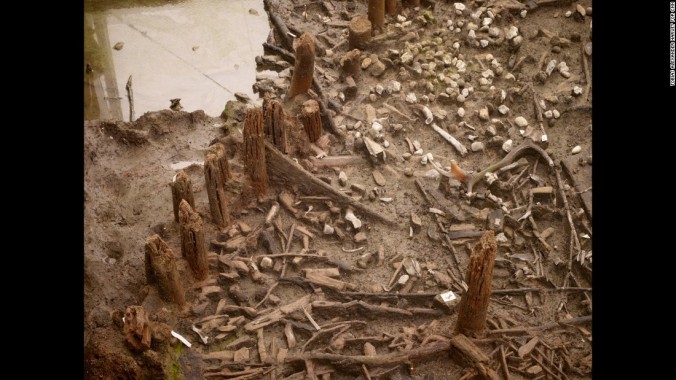 Source: A 3,000-year-old world has been unearthed in England’s Fenlands – CNN.com

“A simple grave in a Late Roman cemetery holds a remarkable find: a middle-age man wearing an ornate belt covered with images of dolphins and dogs.”

On this day in 1789, the French revolutionaries in search of arms stormed the Bastille, the former prison that stood as a symbol of tyranny, and in the process killed the governor of the Bastille, Bernard-Rene Jourdan de Launey. The Bastille was then dismantled brick by brick. It remains a symbol of the Revolution!

Mark Chmiel points out an important distinction between two distinguished Holocaust survivors (Elie Wiesel and Hedy Epstein) in this essay. The distinction is significant and telling.

These days I am thinking of two Holocaust survivors.

I met with one today: 86 year-old Hedy Epstein and I had lunch at Blackberry Cafe in Clayton.  The other is receiving an honorary doctorate tomorrow at Washington University: 82 year-old Elie Wiesel, who will also give the commencement address.

Mr. Wiesel and Ms. Epstein have in common the central experience of their lives: their families destroyed by the Nazi genocide.  He survived the Auschwitz death camp, and she left Germany in 1939 on a Kindertransport to Great Britain.

As dawn broke on June 24, 2016, UK politician Nigel Farage was celebrating the triumph of a dangerous narrative. Farage, who until yesterday headed the UK Independence Party, declared the vote in favor of Britain leaving the European Union a victory for ordinary people. “We will get our country back, we will get our independence…

via In the post-factual democracy, politicians win by getting feelings right and facts wrong — Quartz

As one of the most significant religious dissenters in the fight against all religious establishments the Baptist preacher John Leland’s speech at Pittsfield, Massachusetts is particularly revealing. Almost two hundred years later his insights are just as relevant as they were in 1824. In the speech he attacked the remaining religious establishments in Massachusetts (a tax for the support of religion, Sunday laws, and other discriminations in law that privileged one religion or denomination over another). He, therefore, proposed the following amendment into the Massachusetts Declaration of Rights:

“The legislature have no right, and shall assume no power, to establish any religion – force any man to support any — give one religious sect any preference to another – proscribe any man for heresy – appoint any holy days for worship – compel any man to attend public worship, or cease from labor – give any legal reward for religious services, or require any religious test to qualify for office.”

In conclusion he reviewed Massachusetts sad history of religious oppression to support his claims against religious establishments:

“Almost two centuries past Roger Williams was ejected from Salem, and banished from Massachusetts, for contending for the same doctrine – that rulers, in their official capacity, had nothing to do with religion. The contrary opinion prevailed in the colony [Massachusetts]– that legislatures had a divine right to prescribe religion of the people; and, that magistrates had the same right to judge of doctrines and their tendencies. This claim occasioned the Baptists to be whipped, the Quakers to be hanged, and the witches to be gibbeted. Admit of the principle, that religious opinions are objects of civil government, or in any way under its control, and the broad stair is laid in the case that leads to the inquisition. Admit of the principle, and the rights of the people rest upon the good will of the legislature, and the benevolence of towns; whereas, they ought to rest upon a footing, out of the reach of the ill will of the legislature, and the malevolence of towns. Though the tree may be hewn down, yet, the just liberty of the people is not secure, while the stump is preserved with a band of iron and brass.
….
I close, by observing that here is an arm seventy years old, which, as long as it can rise to heaven in prayer, or wield a pen on earth, shall never be inactive, when the religious rights of men are in jeopardy.”

For more on Leland see my early post on him. 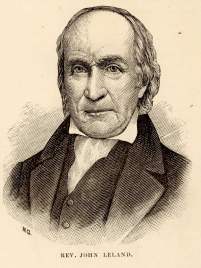