Christine Haynes suggests that we remember the Battle of Waterloo for the peace building process that followed it. “This battle deserves to be celebrated not as the end of the first “total war,” but as the beginning of a “total peace,” which following two more world-wide conflicts, came to fruition after 1945 but is facing new challenges today.” Read his argument here:

History News Network | Why It’s Time to Remember Waterloo for a Different Reason. 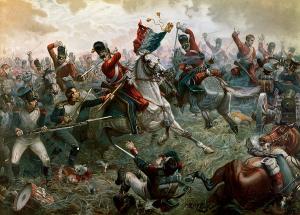 Like Loading...
The Battle of Waterloo is one of the most famous battles in history since it marks Napoleon’s ultimate and final defeat. Escaping from the island of Elba, where he had been exiled after his first defeat, Napoleon took power once again of the French empire only to be defeated by the British and Prussians a few months later at Waterloo.
But as the 200th Anniversary of this battle approaches, its commemoration poses a dilemma for those countries involved in the conflict, France in particular. Alan Forrest, author of Great Battles: Waterloo, examines the difficulties presented by this commemoration. He asks, “Is it appropriate, in the twenty-first century, to celebrate, joyously, an engagement that resulted in the deaths of so many soldiers in a single day? Should we not remember Waterloo more for the scale of the sacrifice it demanded of the men who fought and the families they left behind, or for the fact that it ushered in a century of relative peace following the Congress of Vienna? Or is it more about the colour of the military spectacle – as will doubtless be exemplified in the re-enactments of the battle that will take place on 18 June and the days following?”
Read his thoughtful examination of the commemoration here:

History News Network | Just What Exactly Are People Commemorating on the 200th Anniversary of Waterloo?

Painting of the Scots famous cavalry charge at the Battle of Waterloo by Elizabeth Butler: Scotland for Ever!, 1881