“Russia and Iran are deeply embedded in Syria; they cannot be dislodged and will always remain a player in shaping Syria’s future. The US has little choice but to accept this simple reality.” As much as I hate the idea, I think that Alon Ben-Meir is right. Given the situation, our only option if we want to stop the conflict in Syria and defeat ISIS is to work with Russia and Iran (both of which have substantial interests in the region). What’s the alternative?

Read an overview of Ben-Meir’s solution here: History News Network | These Are the Hard Steps that Must Be Taken to Resolve the Syrian Mess

Like Loading...
Lawrence Davidson prompts European nations to accept the fact that homogeneous states are no longer realistic (if they ever were!). Therefore, “from every angle, ethical as well as historical, the way to approach the present refugee crisis is to allow, in a controlled but adequately responsive way, the inflow of those now running from the ravages of invasion and civil war. In so doing we should accept the demise of the homogeneous state. Whether it is Germany, France, Hungary, Israel or Burma, the concept is historically untenable and neither raises nor even maintains our civilizational standards. Rather it grinds them down into the dust of an inhumane xenophobia.”
I agree with Davidson that ideal vision of the nation-state of the past is a fantasy and that all European nations (I would add the U.S. as well) need to step up and help these refugees. However, it’s not enough just to accept the idea that nation-states must be multi-cultural. France, for example, has been a diverse society for some time now, but that hasn’t solved the problem of creating a harmonious society. The first difficulty will be to redefine what it means to be a member of a nation. Any definition that limits inclusion to those who have the right heritage (French ancestry, for example) or religion must be abandoned in favor a more inclusive definition (all citizens are members of the nation). This will not be easy, but diversity is a reality and it can be a benefit.
What’s the alternative? Any attempt to maintain uniformity within a nation can only come at great cost.  What Jefferson claimed in reference to religious uniformity is equally applicable when it comes to attempts to maintain uniformity more broadly: “is uniformity of opinion desirable? No more than of face and stature Introduce the bed of Procrustes then, and as there is danger that the large men may beat the small, make us all of a size, by lopping the former and stretching the latter. Difference of opinion is advantageous in religion. The several sects perform the office of a Censor morum [moral censor] over each other. Is uniformity attainable? Millions of innocent men, women, and children, since the introduction of Christianity, have been burnt, tortured, fined, imprisoned; yet we have not advanced one inch towards uniformity.”

History News Network | Get Used to It Europe: Homogenous States Are a Thing of the Past

This is an interesting comparison between the Iran nuclear agreement and the North Korean one: History News Network | Here Are One Dozen Reasons Why The Nuclear Agreement with Iran Is Better than the One with North Korea

It’s easy to forget our anti-Catholic past with six Catholic Supreme Court Justices (Alito, Thomas, Scalia, Roberts, Kennedy, and Sotomayor) and a significant Catholic presence (30.7%) in Congress.  “But it was not that long ago that word of the impending arrival of a pope on the shores of the United States would have triggered bloody riots and a call to arms. Indeed, for most of this nation’s history Americans saw the Pope as a sinister and dangerous leader who was determined to destroy America’s experiment in republican government,” as Edward T. O’Donnell reminds us.

It’s hard to over state the significance of this change in attitude. But rather than attribute this change to “the strength of religious tolerance in modern American society” in general, as O’Donnell claims. I think it has more to do with demographic changes (thanks to large numbers of Catholic immigrants) and the realization on the part of conservative Protestants that they have a lot in common with Catholics, who have become allies on many issues dear to Protestants. But for whatever reason, the new-found tolerance of Catholics is encouraging for the future of religious liberty.

The history of anti-Catholicism sentiment should remind us that the fears that drive intolerance are usually grounded in falsehoods and prejudices, not reality. Therefore, we should always be skeptical of  malicious claims hurled at any group. They are often false. And besides, we should treat individuals as individuals, not as representatives of a particular group.

And as O’Donnell reminds us, “we must not delude ourselves into thinking our work is done on this front [toleration]. For the history of United States makes clear that this tradition of religious tolerance is one that has evolved and expanded over time to include many faiths initially deemed beyond the pale, including not just Catholics but also Jews, Mormons, and Jehovah’s Witnesses. We would do well to keep this in mind as recent immigration continues to expand the nation’s religious diversity. This is especially true in the case is Islam, a religious tradition that polling data reveals many Americans view with fear and hostility not very different from that reserved for Catholics a few generations ago.”

Read the entire article here: The Pope Is Coming to Get Us — At Least That’s What We Used to Think | Edward T. O’Donnell

Some words of wisdom from the preeminent historian Joseph J. Ellis: “once we get past seeing the founders as cartoon-like characters, all kinds of lights go on along the line between then and now. Is the paralysis of the current federal government a function of the political architecture the founders designed, which is now anachronistic, or more a product of our own making? Does our own failure to arrest the catastrophic consequences of climate change help us understand why the most gifted political leaders in American history could not put slavery on the road to extinction? Does our enhanced awareness of the depth and resilience of racism in our own time modify our posture toward its virulence within the founding era? At a historical moment when the term ‘political leadership’ has become an oxymoron, how do you explain its flowering at the founding? Such questions constitute a serious conversation across all ages that is blissfully bereft of nostalgia, condescension and utopian delusions. If the founders were not flawed, they would have nothing to teach us. And they do.” 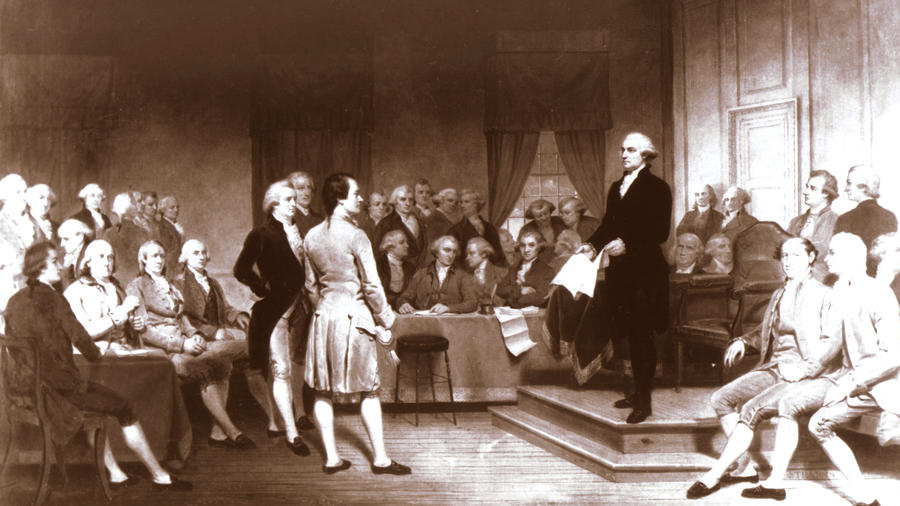 “Trump is simply the most visible embodiment of a society that is not merely suspicious of critical thought but disdains it. Trump is the quintessential symbol of the merging of a war-like arrogance, a militant certainty, and as self-absorbed unworldliness in which he is removed from problems of the real world.”

In Trump’s success Henry Giroux sees the warning signs of a society ripe for totalitarianism (anti-intellectual, militaristic, authoritarian impulses, self-absorbed, racist, ideological). While I’m not convinced that Trump is the ideal candidate to become the iconic leader of a totalitarian society (even though he has many of the necessary characteristics), I think Giroux’s critique of the current state of society is very valuable. He sets out to wake us up from our current apathy and to prompt us to think critically about the dominant neoliberal agenda in which “time presents itself as a form tyranny, an unquestioned necessity, and in speeding up the flows of work, leisure, knowledge, and everyday life it spawns a new kind of violence in which the flow of capital replaces the flow of thoughtfulness, atomization replaces a notion of shared solidarity, the spectacle undermines historical memory, privatization seeks to erase all notions of the public good, and manufactured precarity replaces any sense of security and long-term planning.”

He goes on, “What is clear in this case is that a widespread avoidance of the past has become not only a sign of the appalling lack of historical consciousness in contemporary American culture, but a deliberate political weapon used by the powerful to keep people passive and blind to the truth, if not reduced to a discourse drawn from the empty realm of celebrity culture. This is a discourse in which totalitarian images of the hero, fearless leader, and bold politicians get lost in the affective and ideological registers of what Hannah Arendt once called “the ruin of our categories of thought and standards of judgment.”[5] Of course, there are many factors currently contributing to this production of ignorance and the lobotomizing of individual and collective agency. The forces promoting a deep seated culture of authoritarianism run deep in American society.”

Too few people are aware of this growing problem, and the problem is not just the fact that adjuncts are an exploited work force. This injustice also has broader implications for the quality of higher education.

Caroline Fredrickson at The Atlantic explains the problem, and uses an interesting analogy with companies like Uber:  “With courses that need to be taught every semester led by an interchangeable set of adjuncts, the schools seem to be doing just what trucking companies, housecleaning services, and now app-driven businesses such as Uber and Lyft have been accused of doing: misclassifying workers as contractors. Especially when a teacher is asked to carry out similar responsibilities as full-time permanent staff but for less than half the salary, there may be grounds to believe that universities and colleges are evading their legal obligations as employers. And with the overrepresentation of women in these jobs, it seems possible that many of these universities could be violating not only labor laws but civil-rights laws as well.”

Read the entire article here: There Is No Excuse for How Universities Treat Adjuncts – The Atlantic

To remain in power the Chinese government must not only use the threat of punishment, it must also control what its citizens think and believe. In a battle of ideas the authoritarian regime would likely lose against the ideals of liberty, natural rights, and democracy.  Knowing this, the regime has resorted to cordoning itself off from the ocean of ideas that flow freely outside its borders.

But as Peter Zarrow points out, “Because the entire family of notions associated with democracy, liberty, and rights has become Chinese, they are ineradicable. Indeed, the very categories of ‘Western values’ and ‘universal values’ are incoherent in our thoroughly globalized world. Furthermore, since the 1980s, Chinese have gotten used to freedoms that include the choice of where to live and what job to take, much less whom to marry—a particular focus of New Youth concern—and attempts to barricade off a sacred party-state from the realm of personal freedoms will require ever greater resources.” A problem that will only get worse. Let’s hope their eventual frustrated attempts to retain power will not require significant bloodshed!

Jacob Riis profoundly changed the image of poverty in New York City after he published his photographs in 1890. Photography was still in its infancy, so Riis actually had to invent a new method of lighting up the dark spaces in which the poor lived. His photos were so shocking that they actually brought about reforms that significantly improved the conditions of the working poor (mostly immigrants) living in New York City.

If you have not seen his photos, I would highly recommend doing so. They are shocking! I posted a few below.  How The Other Half Lives, by Jacob Riis: