“Kinzer concludes by returning to the republican tradition: “Nations lose their virtue when they repeatedly attack other nations,” he writes.

That loss, as Washington predicted, has cost the United States its felicity. We can regain it only by understanding our own national interests more clearly. It is late for the United States to change its course in the world—but not too late.

The recovery of civic virtue and the clarification of national interest are urgently necessary goals, and the only way we can hope to achieve them is by reviving the debate over American empire.”

Source: How the US Began Its Empire | by Jackson Lears | The New York Review of Books

Christian Appy, author of American Reckoning: The Vietnam War and Our National Identity, in an interview reflects on the legacy of the war. As usual, he offers great advice based on years of study. For example, he proposes “that we fully and finally dispense with American exceptionalism. I don’t think the historical record justifies the faith, it alienates other people and nations (for obvious reasons), and it contributes to public acquiescence to the tiny few who make foreign policy in our name and are all to ready and willing to assure us that they can be trusted to use our ‘indispensable’ power as a force for good in the world.”

Read the entire interview here: History News Network | Christian Appy on the Legacy of the Vietnam War: An Interview

Like Loading...
In his review of Appy’s book, Ron Briley concludes that it “is a provocative read and presents a convincing argument regarding the Vietnam War as exposing the myth of American innocence. Yet, the concept of American exceptionalism continues to exercise a strong hold upon the nation’s belief system, and the fiftieth anniversary of the Vietnam War may not provide the national reckoning so passionately called for by Appy.” Read the entire review here:

Like Loading...
R. B. Bernstein, author of Thomas Jefferson and The Founding Fathers Reconsidered, examines the conservative mantra of American Exceptionalism and wonders “[h]ow are we to take these polemicists’ rhetoric seriously, when it celebrates a past and a nation that never was.” We can’t! As Bernstein points out: “Their vision of the nation is of one with a pure and virtuous past, with nothing to complain about or apologize for; of a nation that has always treated everyone fairly, justly, and equally; of a nation whose past is a triumph of justice and progress. To these critics, any critical thinking about that past, any investigation of its less savory elements, is hating America. To them, any acknowledgment that the nation’s record is less than sacrosanct, is hating America. Any attention to those who challenged American injustice or inequality, is hating America.”

Read the entire article at:

(Thanks HNN for the pointer!) 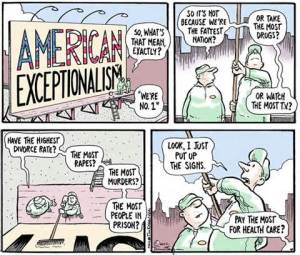 The link to this cartoon no longer exists but it looks like it originated at truthdig.com

This is a comical “More Patriotic AP history test” from Funny or Die. It’s just what the conservatives ordered! This is my favorite question:

To see the entire test go to: 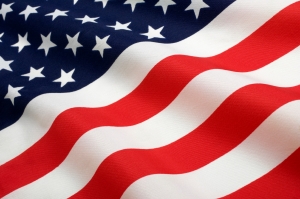 Like Loading...
The historian Steve Hochstadt comments on the Senate Intelligence Committee Report and concludes: “It is noteworthy that those conservative Americans who insist most loudly that we should follow the founding documents literally, and who also insist that the US is an exceptional nation because of its moral virtue, defend torture because they believe it is effective. The rejection of torture as immoral has now become a “liberal” idea, just as it was in the 18th century, when the most liberal political leaders in the world founded our nation.” Read his assessment at:

Like Loading...
Malcolm Gaskill discusses the myths about the Puritans and Thanksgiving that have become so much a part of our national identity. He writes: “I’d like to think that things have improved in US schools since Loewen [author of Lies My Teacher Told Me] was writing. But the myths he describes thrive elsewhere, perhaps because previous generations have cherished them into adulthood. Liberty and democracy are historical tripwires. Pilgrim ‘liberty’ was not something we would much fancy today. New Plymouth’s government was more like an oligarchy than a democracy, and the idea of freedom of speech was anathema. Passengers on the Mayflower drew up a compact, often painted as an egalitarian proto-Constitution whereas in reality it was just a socially-exclusive old world company agreement. ‘In their pious treatment of the Pilgrims,’ Loewen argues, ‘history textbooks introduce the archetype of American exceptionalism.’” It is difficult to challenge cherished myths, but I hope Gaskill is successful because we can learn more from the truth!

History News Network | This Thanksgiving Let’s Finally Stop the Nonsense About the Puritans and Pilgrims.