The historian Ronald Grigor Suny offered a potent lesson, not just for Turkey, but for all peoples in The New York Times this past week. Assaulting historical truth in the service of political ends is nothing new. However, a recent rise in nationalism in places like Russia and Japan has brought this issue to the forefront as a potential destabilizing force. Suny persuasively explains why this is a concern and why Turkey should admit to the genocide. “It is well known that each nation feels its own pain and has difficulty feeling that of others. Yet reconciliation of Armenians, Kurds and Turks — who are fated to live next to each other — will require both an acceptance of their shared history and mutual suffering and a hard look backward in order to move forward. Acknowledging who set the fire and directed it against the most vulnerable population must be part of the healing.” Read the entire article here: 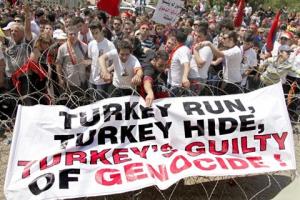