Yes, it did! However, Brian Dunning challenges some of the exaggerated stories surrounding the 1914 Christmas Truce.  Dunning is right to question the excessive mythic stories of this story, but even in its more toned down version it is a wonderful story that should inspire hope for humanity.

I love this story! It was a bright spot in a horrible war. It gives me faith in humanity, and exposes the folly of war. It breaks my heart when these young men are forced to return to the trenches to begin killing each other for no reason. Soon suffering and propaganda fostered a hatred that ensured that they could no longer see each others humanity. There would be no more truces.

This December 25 will be the hundredth anniversary of the Christmas Truce that occurred during World War I.  An event worth celebrating! Usually most “outbreaks of peace,” as Adam Hochschild points out, are not celebrated but “the anniversary of this one is being celebrated with extraordinary officially sanctioned fanfare.” The fact that this event “did not represent a challenge to the sovereignty of war” and is receiving significant support from European governments and the Football Association [soccer] explains why this particular event (and not other peace promoting events) will be celebrated. While Hochschilds supports the celebration of this event he thinks that we should celebrate peace and peacemakers more often. He suggests:

“Perhaps when the next anniversary of the Iraq War comes around, it’s time to break with a tradition that makes ever less sense in our world. Next time, why not have parades to celebrate those who tried to prevent that grim, still ongoing conflict from starting? Of course, there’s an even better way to honor and thank veterans of the struggle for peace: don’t start more wars.”

History News Network | Why No One Remembers the Peacemakers. 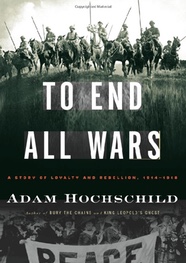