The historian Steve Hochstadt comments on the Senate Intelligence Committee Report and concludes: “It is noteworthy that those conservative Americans who insist most loudly that we should follow the founding documents literally, and who also insist that the US is an exceptional nation because of its moral virtue, defend torture because they believe it is effective. The rejection of torture as immoral has now become a “liberal” idea, just as it was in the 18th century, when the most liberal political leaders in the world founded our nation.” Read his assessment at: 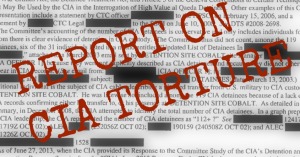 Like Loading...
Alfred McCoy, historian and author of the books Torture and Impunity and A Question of Torture, interprets the Senate Intelligence Committee report on CIA torture within the broader history of United States’ conflicted relationship with torture. In conclusion, he writes: “Despite its rich fund of hard-won detail, the Senate report has, at best, produced a neutral outcome, a draw in this political contest over impunity. Over the past forty years, there have been a half-dozen similar scandals over torture that have followed a familiar cycle—revelation, momentary sensation, vigorous rebuttal, and then oblivion. Unless we inscribe the lessons from this Senate report deeply into the country’s collective memory, then some future crisis might prompt another recourse to torture that will do even more damage to this country’s moral leadership.” Read his entire essay at:

History News Network | How to Read the Senate Report on CIA Torture. 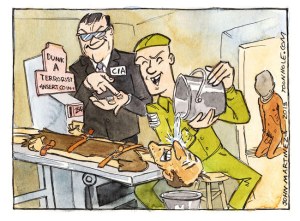 I’m shocked that some Americans think that torture works! Even before I started studying history I thought that the issue was settled. After years of studying history I’m even more convinced that torture doesn’t work. The evidence does not support it. All it has done is spread human misery and suffering. Lawrence Davidson reminds us of the history that debunks the myth that torture works in his article “The Forgotten Futility of Torture – An Analysis.” I would like to believe that a familiarity with history could make a difference in changing minds, but I’m afraid that Davidson is correct when he concludes that “[n]o one has yet been able to secure a meaningful place for relevant and accurate historical knowledge either in the mind of the general public or in the deliberations of policy makers. However, in both cases, ignorance and false assumptions seem secure in their positions of influence.”

Please read his full essay on this topic at:

History News Network | The Forgotten Futility of Torture – An Analysis.

Like Loading...
Juan Cole writes: “We know what the Founding Fathers believed. They believed in universal rights. And they believed in basic principles of human dignity. Above all, they did not think the government had the prerogative of behaving as it pleased. It doesn’t have the prerogative to torture.”
Read the full article at:

History News Network | Why the Founding Fathers thought banning Torture Foundational to the US Constitution.