“The Vatican has refused to open all of its World War II archives. Pope Francis’ visit to Auschwitz on Friday is the perfect moment to change policy.”

The Vatican is most likely reluctant to open the archives out of a desire to protect the image of the Catholic Church, which is understandable but misguided. The appearance of secrecy does nothing to help their image. At least if they give historians access to the WWII documents we can learn the truth and potentially undermine some of the most outrageous conspiracy theories.

Source: How the Vatican Can Shed Light on the Holocaust – The New York Times

David A. Bell writes a much-needed rebuke against the popular tendency to compare everything with World War II and Hitler. As he explains, “Comparing modern threats with World War II is neocon nonsense.” It may seem like harmless drama, but this kind of hyperbole has real consequences. As Bell points out, “References that were already misleading a generation ago have become dangerously absurd. The putative lessons of history have become imprisoning, rather than enabling. In this sense, we really do suffer from an excess of it.”

His discussion of the Munich lesson is particularly noteworthy.  “Ever since, it has been de rigueur for Americans to justify action against alleged foreign threats with Hitler analogies, and to denounce the alleged appeasement of such threats with Munich analogies. Sometimes, the comparisons have been laughably inappropriate.” We see almost all foreign events through this lens and it has made us particularly war prone. We have come to see violence (or the threat of violence) as the most effective tool of foreign policy.

To read the other dangers posed by using inappropriate WWII analogies go here: Not Everything Is Munich and Hitler | The National Interest

In conclusion Bell writes, “But it can still help if as many people as possible take the time to remember just how false the comparison actually is, and if they keep in mind that a keen sensitivity to the parallels between the past and the present is not always a good thing. When it comes to the moral lessons of the terrible years the world lived through between 1939 and 1945, particularly those of the Holocaust, we must always remember. But when it comes to the strategic lessons of that era, we might do well, sometimes, to forget.”

I agree with Bell’s overall analysis, but I have to disagree with his solution: forget history. The problem is a result of superficial knowledge, bad analogies, and a desire to inflate the importance of one’s own issues by associating them with extreme examples (Hitler, genocide, slavery, etc.). 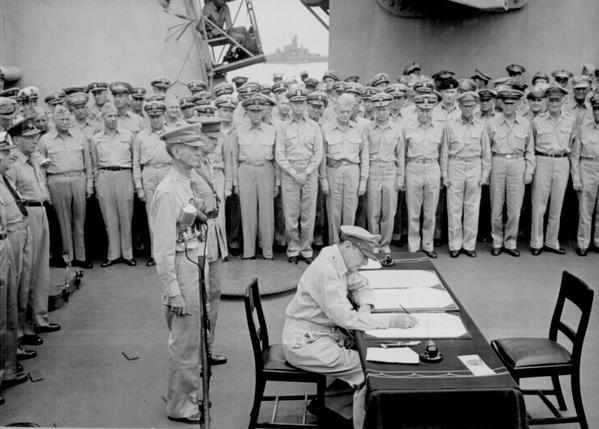 This is a wonderful story on the anniversary of the attack on Pearl Harbor: “By Karin Stanton HONOLULU (Reuters) – Former U.S. airman Jack DeTour, 92, and Japanese fighter pilot Shiro Wakita, 88, sworn enemies during World War Two, together poured whiskey from a battered canteen into Pearl Harbor on Sunday to commemorate the 1941 attack on the U.S. naval base. As the sun rose over the USS Arizona Memorial, the two former enemy pilots joined the “Blackened Canteen” service on the eve of the 74th anniversary of the Dec. 7 attack, which took 2,403 lives and drew the United States into World War Two. Standing side by side after meeting for the first time ever, retired Air Force Colonel DeTour and former Imperial Japanese Navy Zero Pilot Wakita together gripped the war-torn U.S. military-issue metal canteen and poured whiskey into the watery grave of the U.S. Navy ship sunk by Japanese bombers.”

“Japan said it may cut its financial contribution to an agency of the United Nations after the organization added documents on the Nanjing Massacre to its International Memory of the World Register last week.” The nationalist government in Japan proclaims that it wants to restore honor to the Japanese people, but its actions (denial of WWII war crimes, etc.) have served only to bring dishonor to the Japanese people. The honorable thing to do would be to own up to their past crimes and work to ensure that their nation never goes down that path again.

“The most important participants in this journey are not the living, but the dead: the bones of 115 Koreans brought to Japan as labourers during the Asia-Pacific War will be carried along the route, with ceremonies of remembrance along the way, to their final resting place in Korea. The itinerary they will trace in September follows, in reverse, the route they travelled in trucks and boats and trains when they were taken to remote mines and construction sites in wartime Japan, unaware that they would never see their homes or families again. More than seventy years on, they are at last going home.”

Brian Dunning respectfully examines the merits of the Pearl Harbor conspiracy theory that the American government knew about the attack and did nothing. In conclusion he states, “Even if this presumed conspiracy to allow the attack did exist, it failed to have any effect where the rubber meets the road. No orders from Washington altered the state of readiness at Pearl Harbor. Obviously the attack ultimately did play into the hands of anyone who wanted war with Japan; every tragedy somehow benefits somebody. That doesn’t make every tragedy a conspiracy.”