Warren Throckmorton, author of Getting Jefferson Right, calls out the Christian Right for supporting David Barton when they know that his work is not credible.

“The awareness of Barton’s systematic distortion of the nation’s founding is well known at the highest levels of the Christian political right and yet many such groups continue to promote Barton as an exemplary historian.  Because the Christian right is aware of the problems but continues to feature Barton as an historian, the ‘great confrontation of 2012’ has turned into the ‘great cover-up of the present.’”

Read the entire article at http://www.patheos.com:
The Great Confrontation of 2012: David Barton and the Evangelical Historians. 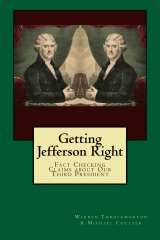