M. AndrewHolowchak explains why Conor Cruise O’Brien’s claim that Jefferson favored an anarchic freedom that must be maintained with the blood of martyrs is a misreading of Jefferson’s vision. It is this reading of Jefferson that has been championed by some to justify their own pursuit of an absolute freedom from all governmental constraint. It was also this vision that, in part, inspired Timothy McVeigh to bomb the federal building in Oklahoma City. He was wearing a t-shirt on the day of the bombing with the famous quote from Jefferson:”The tree of liberty must be refreshed from time to time with the blood of patriots and tyrants.” ButHolowchak argues that this is a misreading of Jefferson. Jefferson’s ideal of liberty was more nuanced and progressive.  “O’Brien commits Jefferson only to “negative liberty” of a radical sort, which amounts to freedom from governmental intervention in any activities whatsoever. Jefferson’s embrace of negative liberty, however, is freedom from the encroachments and corruptions of government—i.e., freedom of all citizens from the tyranny of one or some group of humans with power—not freedom from all encroachments. Some encroachments are needed to preserve freedom. Government must act in ways to maximize opportunities for human flourishing—e.g., advocacy of freedom of religion, repeal of entails and primogeniture, and push for general education of all citizens.”
“In sum, Jefferson was never committed to liberty per se, but always committed to liberty in the service of intellectual and moral advance.”

History News Network | Can Timothy McVeigh and His Ilk Claim Jefferson as a Hero of Liberty?. 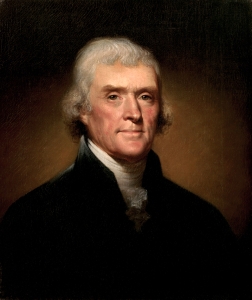