Reflecting on the current religious violence Susan Jacoby turns to the history of the Crusades for insight. But it is not the Christian conflict with the Muslims that she finds most useful; instead she turns to the Crusades first victims: the Jews. To Jacoby, the Christian attack on the Jews “highlights several elements analogous to the actions of modern terrorist groups. These include attempts at forced conversion; the murders of women and children; and the imposition of financial penalties on coerced converts who try to remain in their homes.” From this comparison she concludes: “What we actually see today is a standard of medieval behavior upheld by modern fanatics who, like the crusaders, seek both religious and political power through violent means. They offer a ghastly and ghostly reminder of what the Western world might look like had there never been religious reformations, the Enlightenment and, above all, the separation of church and state.” You can read the entire article at The New York Times:

The First Victims of the First Crusade – NYTimes.com. 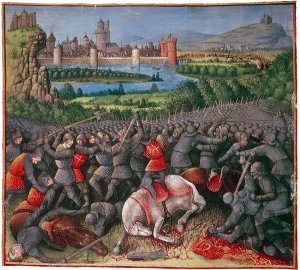