Obama’s refusal to call ISIS (or ISIL) a radical Islamic organization has sparked a debate over the relationship between religion and violence. The controversy escalated after he reminded Americans of Christianity’s violent past at the recent national prayer breakfast. Much of the outrage over his comments was motivated by the belief that Obama had fabricated the claims and insulted Christianity. At the same time many in this camp also believe that Islam is responsible for the violent behavior of ISIS. To them Christianity is the good religion and Islam is the bad one. This opinion is grounded in bias rather than evidence and we can safely dismiss it. That leaves us with the two contradictory views presented by Obama: 1) religion has no relationship to ISIS, or 2) religion, at least in part, is responsible for the violent behavior of Christians in medieval and early modern Europe as well as ISIS in the Middle East today. In the above cited essay, the historian Jeffrey Herf argues that both are culpable in the same way. Different traditions and selective use of sacred texts result in different behaviors and versions of the same religion. As Herf points out,

“Western governments have tied themselves in knots to the point of foolishness because they refuse to state what is obvious to many millions of people about the importance not of the religion of Islam per se but of interpretations of Islam in this era of terror. Just as it makes no historical sense to discuss slavery or the Holocaust without examining Christianity’s contributions, so it is ridiculous to assert that the Islamic State, the Hamas Covenant, the fanaticism of the Iranian mullahs, al-Qaeda, Hezbollah, and the Muslim Brotherhood have nothing to do with Islam. It amounts to saying that its adherents either do not mean what they say or that they don’t know what they are doing. Both assumptions are condescending. To be sure, these varieties of Islamism differ from one another, but they all engage in the labors of selective tradition. They did not invent the texts that they quote but they have selected and emphasized some rather than other components of the tradition. They can all point to passages in the Koran and in the commentaries about it that in their view justify attacks on the Jews, on Muslims of whom they disapprove, on Christians and on other assorted ‘infidels.’”(“One Standard, Not Two, for Christianity and Islam”) 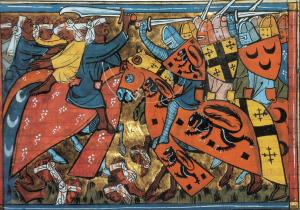 Can Obama’s policy of denial be justified in terms of its utility? The President argues that “[w]e must never accept the premise that they put forward, because it is a lie, nor should we grant these terrorists the religious legitimacy that they seek…They are not religious leaders, they are terrorists. And we are not at war with Islam. We are at war with people who have perverted Islam.” (CBS News) I sympathize with this argument, but I don’t think that it will be effect in protecting Muslims or in defeating terrorism. Rather than push back against false generalizations that lump all Muslims together and/or claims that we’re at war with Islam, Obama has chosen to ignore what seems obvious in the hopes that there will be no backlash against Muslims. I am concerned about this very real problem as well. But the solution is not to deny the role that religion plays in motivating these radical groups. At the same time as we recognize the role that a particular version of Islam plays in these groups, we must be very careful not to retaliate (or hate) Muslims in general. As was pointed out in The New York Review of Books in discussing the Brievik case in Norway: “it takes only one jihadist—or counter-jihadist—to change everything, and that right-wing anti-immigration politics and jihadism are mutually reinforcing. ‘The relationship between the extremists is a symbiosis,’ said Sultan, the Muslim politician and analyst of extremism. ‘The anti-Muslims actually need Muslim extremists to grow. For these people its vital to have someone like Ubaydullah Hussain, so they can say everyone is like that.’” (“Norway: The Two Faces of Extremism”) We also need to push back against those who are trying to make this a war against Islam. We (not just the West) are at war with a radical group that adheres to a particular version of Islam.

As Herf asserts: “we cannot defeat an enemy that we refuse to describe accurately.” Many of those who deny that ISIS has any connection with Islam, claim that Islam is simply “a cover for a sadistic battle for power and plunder.” (The New York Times) A policy needed to deal with power-hungry sadists is not the policy needed to deal with true-believing religious extremists.

One Standard, Not Two, for Christianity and Islam – The American Interest.