How important are genes in determining our political leanings? More and more research supports the claim that genes play a significant role. This is the subject of Avi Tuschman’s new book Our Political Nature. In a brief interview at the HNN, he summarizes his findings. He explains: “The left-right spectrums that run through countries around the world have a natural history and therefore a common structure (even though they widen and shift in response to environmental stress, like economic conditions). This common origin explains why many controversial issues – like gay marriage – invariably polarize political spectrums everywhere in the same direction. If the environment determined everything, there would be at least a few countries out of the nearly 200 where the left is fighting against gay rights and the right is fighting for them.” Read the full interview at:

History News Network | The Evolutionary Origins of Politics: An Interview with Avi Tuschman. 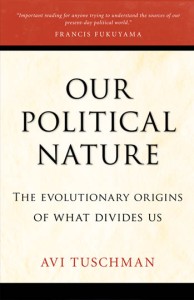