I have not read David Sehat’s new book, but based on his previous book (The Myth of American Religious Freedom) I am very excited to see that he has a new book out. His new book focuses on exposing the contradictory and contentious nature of the politics of the Founders, thus making them unsuitable as infallible guides to  present politics.
Ron Briley, in his comprehensive review of The Jefferson Rule, praises Sehat’s

“argument that the Founders were ‘a querulous and divided group that did not and cannot offer the guidance that we might wish’ (241),” and his conclusion “that we should ‘dispense with the talk of the Founders in order to make a straightforward case for whatever policy is under discussion. Doing so would not solve all of the problems. But it would be a first step to a better political debate’ (243).” 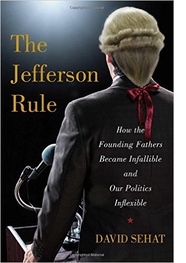