Many of those who object to the Obergerfell ruling have compared it to the disgraceful Dred Scott (1857) decision that declared that even free blacks could not be citizens and that the Missouri Compromise was unconstitutional thus effectively nullifying the idea of slave free states. Amy Davidson debunks this flawed analogy in a discerning article at The New Yorker.  The analogy basically fails because “Dred Scott constrains liberty and Obergefell expands it,” but Davidson further breaks down the failures of this analogy by diving deeper into the Scott case. Thus Davidson’s exposé is also a reminder of the shameful racism that is part of our historical legacy.

Why are some using this analogy? Davidson concludes, “In part, Dred Scott is simply being used to give Obergefell a bad name—as pure invective, another way to call the decision rotten and the Supreme Court deluded. This is low enough; Dred Scott is a truly degraded decision, in a way that no other of the Court, conservative or liberal, has since matched. And, in part, the analogy reflects the notion, held by some contemporary conservatives, that they are now the ‘real’ victims of bigotry.”

Read the entire article here: What Does Marriage Equality Have to Do with Dred Scott? – The New Yorker. 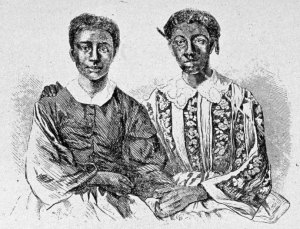 It’s not pretty, but we should know about this tragic history. Please watch this brief history of “the U.S. Government’s War on Gays.”

At the History News Network the legal scholar Robert J. McWhirter calls out the “anti-gay zealots” for their rhetorical tricks, which they use as a cover for their bigotry.  Here’s an excerpt from his incisive piece:

“’Marriage is one of the ‘basic civil rights of man,’ fundamental to our very existence and survival. . . . To deny this fundamental freedom on so unsupportable a basis as the racial classifications embodied in these statutes, [is] … directly subversive … [to] the 14th Amendment . . ..’ Opponents of same-sex marriage can’t attack this head on.  So the first play is to argue definitions.  After all, said George W. Bush, ‘marriage is between a man and a woman.’  Subtext: ‘We don’t deny gay people a fundamental right, we just define them out of it.’”
Read the entire article here:

History News Network | By the Bizarre Logic of Anti-Gay Marriage Zealots, the Supreme Court Should Allow Businesses to Discriminate Against Interracial Couples.

At the HNN, Barry Hankins argues that Baptists are coming to the recognition that they may soon be in the same position as Muslim leaders who “acknowledge that their religious practices are at odds with some facets of American law.” The change that would make Baptists at odds with American law: gay marriage. He fears that if the Supreme Court strikes down the gay marriage bans that exist in some states, then the Baptist belief that marriage is between a man and a women would be under threat. First, he is concerned that the Baptists won’t remember their roots when they were outsiders who were willing to be “fined, horsewhipped, and jailed” for their beliefs. But more importantly he fears that their conception of marriage may be in danger through government intervention.

In an effort to protect marriage as they see it, Hankins explains that the Texas Baptist Christian Life Commission (CLC) has “urged churches to insert in their bylaws a clause specifically defining biblical marriage.” They fear that they may be forced to allow gay weddings to be held in their churches under anti-discrimination laws. To show that this is not wild paranoia, he points to the loss of tax exempt status at Bob Jones University because they refused to accept students who were inter-racially married.

It is doubtful that Hankins’s nightmare scenario will materialize, but it is within the realm of possibility. However, they would only be forced to comply if they were unwilling to give up their tax exempt status. And the loss of this privilege is not unjust, as Chief Justice Warren Burger explained in the Bob Jones case, “to warrant exemption under § 501(c)(3), an institution must fall within a category specified in that section and must demonstrably serve and be in harmony with the public interest. The institution’s purpose must not be so at odds with the common community conscience as to undermine any public benefit that might otherwise be conferred.”

Maybe Hankins, and Baptists in general, should follow the advice of their Baptist colleague, Bruce T. Gourley, who suggested that they reconsider the separationist principles of the Baptist preacher John Leland. While Gourley acknowledges that “the elimination of preferential tax treatment would likely result in weeping and gnashing of teeth among religious groups,” it would allow them “to address politics from the pulpit.” It would also free them from the burdens of tax exempt status. And it would free taxpayers from supporting religious societies that they are not members of. It’s a win, win!

History News Network | The Surprising Thing Baptists and Muslims Have in Common.