At the HNN, Barry Hankins argues that Baptists are coming to the recognition that they may soon be in the same position as Muslim leaders who “acknowledge that their religious practices are at odds with some facets of American law.” The change that would make Baptists at odds with American law: gay marriage. He fears that if the Supreme Court strikes down the gay marriage bans that exist in some states, then the Baptist belief that marriage is between a man and a women would be under threat. First, he is concerned that the Baptists won’t remember their roots when they were outsiders who were willing to be “fined, horsewhipped, and jailed” for their beliefs. But more importantly he fears that their conception of marriage may be in danger through government intervention.

In an effort to protect marriage as they see it, Hankins explains that the Texas Baptist Christian Life Commission (CLC) has “urged churches to insert in their bylaws a clause specifically defining biblical marriage.” They fear that they may be forced to allow gay weddings to be held in their churches under anti-discrimination laws. To show that this is not wild paranoia, he points to the loss of tax exempt status at Bob Jones University because they refused to accept students who were inter-racially married.

It is doubtful that Hankins’s nightmare scenario will materialize, but it is within the realm of possibility. However, they would only be forced to comply if they were unwilling to give up their tax exempt status. And the loss of this privilege is not unjust, as Chief Justice Warren Burger explained in the Bob Jones case, “to warrant exemption under § 501(c)(3), an institution must fall within a category specified in that section and must demonstrably serve and be in harmony with the public interest. The institution’s purpose must not be so at odds with the common community conscience as to undermine any public benefit that might otherwise be conferred.”

Maybe Hankins, and Baptists in general, should follow the advice of their Baptist colleague, Bruce T. Gourley, who suggested that they reconsider the separationist principles of the Baptist preacher John Leland. While Gourley acknowledges that “the elimination of preferential tax treatment would likely result in weeping and gnashing of teeth among religious groups,” it would allow them “to address politics from the pulpit.” It would also free them from the burdens of tax exempt status. And it would free taxpayers from supporting religious societies that they are not members of. It’s a win, win!

History News Network | The Surprising Thing Baptists and Muslims Have in Common. 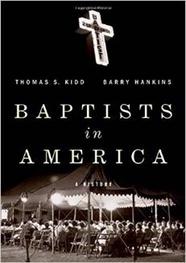