It is so tempting (and easy) to see the world in black and white terms. Things would be so much simpler if we lived in a world with a stark contrast between good and evil. Granted, many people act as if they live in this black and white world, but I think most of us realize that this is delusional. However, there have been some moments in history that seem so clearly to conform to this good vs. evil worldview. World War II is one of them. But if you look closely, this comforting perspective begins to break down. Gavriel D. Rosenfeld has made it his mission to preserve this “moralistic” version of WWII.
He is concerned about what he calls the “normalization” of Nazi Germany. He contrasts this with “the commitment to moralism.” To illustrate, he points to the “[r]evisionist works of scholarship by conservative and liberal Anglo-American journalists and historians, such as Nicholson Baker, Patrick Buchanan, Norman Davies, Niall Ferguson, and Michael Bess, among many others, have deliberately blurred the once clear moral lines between the wartime behavior of the Allies and Axis, in the process relativizing the exceptionality and universalizing the significance of the Nazi era.” It seems that what Rosenfeld means by “moralism” is a clear delineation between good and evil. It would be great if the world was so black and white, but it is not! And I would argue that it has been this kind of moral thinking that has led to so much human suffering.
Rosenfeld contrasts his black and white morality with what he calls “normalization.” By which he seems to mean the “blurr[ing] of once clear moral lines.” However, it is the more sophisticated moral analysis opposed by Rosenfeld that is more authentic and productive of the peace and harmony that he seems to value. We must honestly confront the past even if we don’t like parts of it if we want to make the world a better place. This is not to claim that the Allies (U.S., U.K, and the Soviet Union) were the same in moral terms as Nazi Germany. There is absolutely no moral equivalency between the crimes of the Allies in comparison to the crimes of the Nazis!!!!! It is only to recognize that we were not purely good and the Germans were not purely evil. 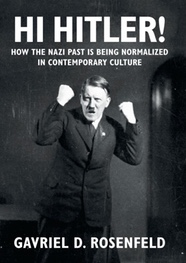